How to Interpret Evidence on ACT Science Test

In Data Representation, Research Summaries, and Conflicting Viewpoints passages, you will need to be able to understand how scientific evidence is presented and answer questions based on this evidence.

Which of the following statements best describes how the abundances of the 8 major elements listed in the table change with increasing atomic number? 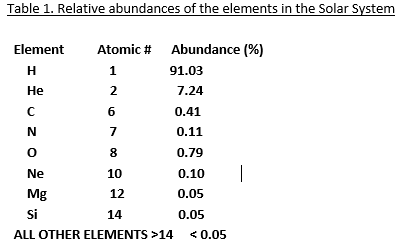 We know this is an Interpreting Evidence question because it refers back to where the evidence is located, the table. Now, what does the evidence suggest? We can see that the atomic number in the third column always decreases as you move downwards. Reading down the second column, the abundances also decrease or remain constant, with one exception: the abundance increases when going downward from N to O. The answer is (B).